Back to All Articles

The Maryhurst basketball season has officially begun. Kids who are living, learning, and developing at Maryhurst’s residential program have the chance to join a recreational basketball league that includes children from other therapeutic programs around the region.

The Maryhurst Monarchs are coached by our Support Team, a group of counselors that specialize in bringing alternative treatment programs—such as exercise-, horticulture- and arts-based therapies—to kids living on Maryhurst’s Dorsey campus.

The Maryhurst basketball league began with a belief in the positive health and character outcomes that come along with participating in a team sport. Playing basketball can teach kids about teamwork and the motivation of healthy competition. Practices and games give kids an outlet for releasing energy, and playing a particular position on the court teaches focus and coordination. 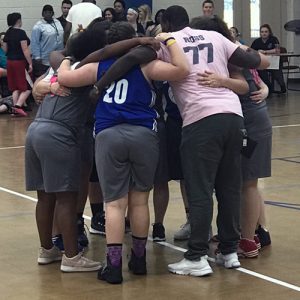 The Monarchs played the team from Uspiritus in the season opener, and games will continue throughout November and December.

Believing in the affirming power of art, Maryhurst Academy has completed a portrait painting project with students that’s exhibiting this month at...

Halloween 2021 - The Return of October Traditions

For the Maryhurst residential program, October is a time to get into the spirit: spooky decorations, candy, seasonal food, and more. COVID-19...

What Horses Can Teach Us: A Collaborative Program with Boys and Girls Haven

This fall, Maryhurst entered a partnership to bring the Boys and Girls Haven’s Equine Vocational Training Program to the youth participating in...

Kiddos in our residential program – and, really, all of us! – are each day finding new ways to take control of their voices. What passions can we...